Do you know what you really want

Do you know what you really want explores the female flight attendant through various morphing sexual roles, ranging from a woman who fulfils the fantasy of the sexually available airhostess, to one who contests her sexualization, and one who asserts her own desires. In my performative video I enact these roles, playing with my perceptions of them and the desires and fantasies associated with each role. In this way I create a character that merges myself, the artist performing, and characters that are not myself. Over the duration of the video the flight attendant tells the camera/viewer about what has ‘happened’ to her inflight, expresses her fantasies, directly asks the viewer questions and reads out descriptions and criteria of an airline hostess. Throughout the video she uses body language and gestures to sexually challenge the viewer: to invite desire or express hostility towards her sexualization. No one role is fixed. She is a good and bad girl, a vamp, a sexually aware and autonomous woman, and a woman who refuses to be defined by her sexuality. The choice of the 1950s clothing and make-up specifically references the glamour years of the cabin, when air travel was exclusive and adventurous. However, where the Lisa Robertson scandal (http://www.smh.com.au/national/milehigh-qantas-fling-sent-fienness-lover-into-emotional-tail-spin-20091209-ki13.html) as it played out in the media, created a 1950s era story where the sexually adventurous woman is punished through loss of reputation and job, the attendant in my video asserts that this is her fantasy and she enjoys it, unpunished through this challenging judgement. In my artwork the protagonist embraces her desire to explore both the eroticised site of the aeroplane cabin and the role of the flight attendant as she sees them. She reveals herself to be performing the varying roles as an expression of her own sexual fantasies and asks if it matters whether she is an actual flight attendant. In Do you know what you really want the aeroplane cabin is seen as an arena through which inner desires, dreams and sexual identity can be expressed or contested. 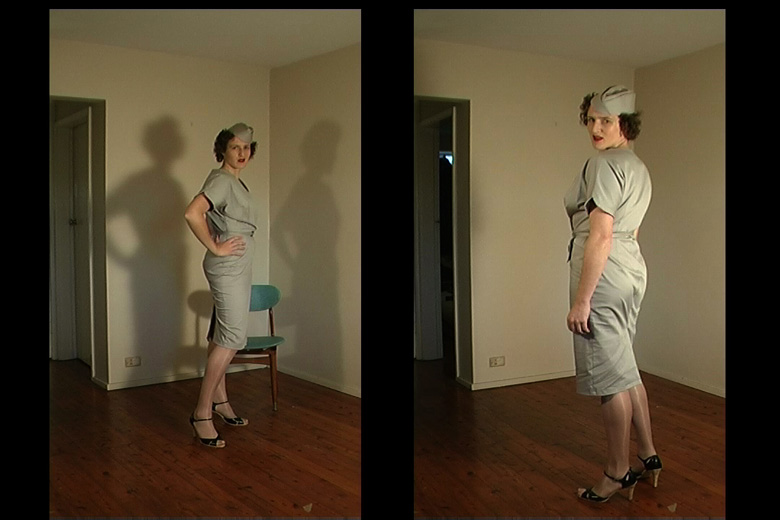